If you thought the first two episodes were too slow, the third episode floored it and delivered far and away the best episode so far.

Barb is in some black, scary, dark world after she was snatched at the pool. She’s screaming for Nancy as the camera cuts to her in bed with Steve as she loses her virginity as her best friend suffers a tragic outcome in typical campy fashion. Barb is trying to escape from this world she’s in and crawls her way to safety when the monster drags her down below as she screams for Nancy.

Will is already missing and now Barb is the second to be snatched but Nancy doesn’t realize it until school the next morning when she doesn’t show up for class. Nancy calls Barb’s mom who hasn’t seen her either. Nancy finds Barb’s car in the same spot they left it the night before and tries looking for her outside the pool until she gets run off after some sort of creature darted across the screen. It didn’t sound like the monster we heard in the first two episodes, though.

Joyce thinks Will is talking to her through the lights and tries to convince Jonathan that’s true but he scoffs at this idea. He thinks she’s losing her mind and so does her boss when she shows up to her place of work and buys about 50 packs of Christmas lights to string up inside the house to communicate with Will.

Chief Hopper is getting deeper into the investigation and signs are pointing him to the Energy Department where Dr. Brenner runs Hawkins Labs. He gets the runaround while there but knows they are lying after they didn’t show him the security footage the day Will vanished and what we can assume, the same day Eleven escaped.

Mike, Lucas and Dustin plan to meet Eleven at 3:15 by the power lines after school but before that El explores the Wheeler home where she turns the TV on with her mind and flips from a Ronald Reagan speech to He-Man to a Coke commercial that triggers a flashback from her time under Brenner’s control. 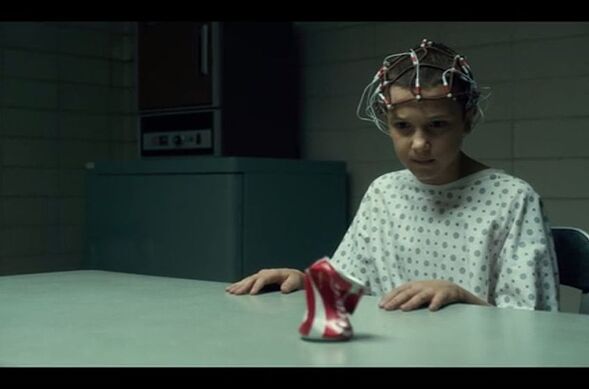 El is learning to harness her mind control powers as Brenner watches from the other side of a glass. El is wearing a headset that they can measure her brain power and she crushes a can of Coke. Brenner looks on with approval as El’s nose starts bleeding. Cut back to the present and El is in Nancy’s bedroom where she listens to a lullaby from a music box and looks over her pictures with her boyfriend. It was like she was looking into the life she never had or the life that was stolen from her because of what Brenner did to her.

Chief Hopper and his sergeant are researching Hawkins Lab when they find Brenner is named in a lawsuit where a woman alleged he took her daughter for LSD mind control experiments. 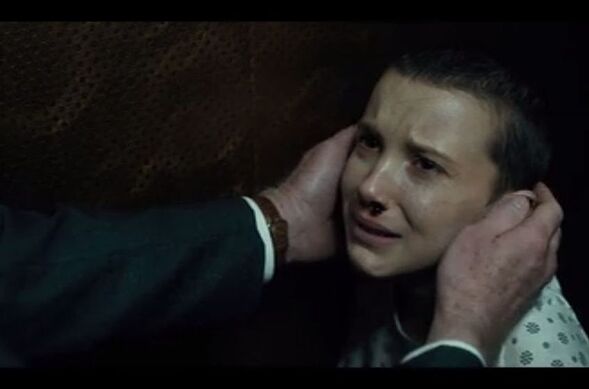 Back to El who has another flashback after she sees a cat while waiting for Mike, Dustin, and Lucas to meet her at the power lines. Brenner has her using her powers on a cat to try and see if she’ll kill it. She stops and says she can’t do it, which prompted her to be hauled away to an isolated cell like we saw previously. This time, when the door was closing on her, she used her powers to keep it open and slammed one guard into the wall and left two dead. But it drained her and left her bleeding from her nose and ear. Brenner was in awe of her power and carried her out of the room and back for more testing.

If that wasn’t powerful enough, we get more confirmation that Will it communicating with Joyce through lights. She devises a yes or no way for him to communicate to which he says he is alive but he is not safe. Later, she paints letters of the alphabet, like a Ouija board, on the living room wall. When Joyce asks where he is, he says “right here” before warning her to run as a monster came out of the walls. The viewer doesn’t get a great look, but it burst through the walls and had long, skinny arms and fingers, it’s purple and has an odd-shaped head. 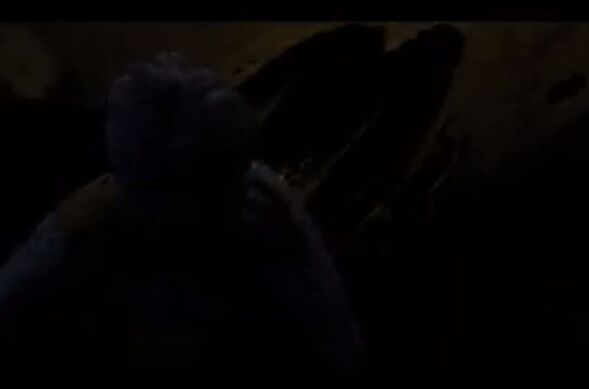 El, Mike, Dustin, and Lucas are searching for Will when she leads them to his house. The boys are confused and don’t know what to do until they see police cars and an ambulance drive by. They think it’s about Will. The viewer sees Chief Hopper’s perspective as a boy is pulled from the water. We’re led to believe it’s Will, but we didn’t get a good look and I’m not convinced that was him.

Joyce meets Jonathan as he was driving and police lights flicker further down the road.