Rim of the World is Goonies meets Independence Day. It’s the perfect movie for your Memorial Day Weekend. Just don’t mistake it for a kiddie film.

Last week it was See You Yesterday, this week it’s Rim of the World. Netflix has now released two films back to back that appear to be kid friendly until their characters start speaking. Though the language in See you Yesterday would make it a rated R film and Rim of the World is a strong PG-13. While this will likely catch people off guard (not many look at Netflix ratings) both are realistic. This is how kids communicate when adults aren’t around. With that said, once the maturity level is established, Rim of the World is a fun ride that will have you pulling for its kids and perhaps falling in love with them.

The natural thing for people to do will be to compare it to Stranger Things but I don’t feel that is appropriate here. This one feels more like some sort of cross between the 90’s kids ensemble movies like The Mighty Ducks, Richie Rich, or Blank Check and your action films of the time like Independence Day.

Rim of the World follows an odd grouping of kids who get separated from their summer camp group just before an alien invasion. They end up with the key to stopping the invasion and are tasked with traveling 90 miles to deliver the key to a NASA building in Los Angeles. All of this while being pursued by an alien that is determined to take them out.

Along the way, they have conflict, love, humor, near-death experiences, and a lot of bonding.

The main thing I want to communicate in this review is that Rim of the World is hilarious. Within the first 20 minutes alone I had to pause several times to share the one-liners and simply adjust to the level of humor on display. Andrew Bachelor (aka King Bach, To All the Boys I’ve Loved Before) is the first one to set the tone as the overly excited but also unfiltered camp counselor. At one point I was going to judge the way that this character was talking but then he and another camp counselor (played by Carl McDowell, Ballers) call this out directly. This let me know that Rim of the World knows what it is and isn’t taking itself too seriously, which is important to know early.

From there, the comedy crown is owned solely by Benjamin Flores, Jr.’s (Ride Along) character Dariush. He’s come a long way since first hitting the scene as “7-year-old rapper Lil’ P-Nut” on The Ellen Show back in 2010 (It’s worth a watch.)

The humor overall is a bit juvenile but definitely not annoyingly so. The pre-teens talk like pre-teens. There are also plenty of pop culture references including a moment where one of the kids yells: “It’s Independence Day!” upon seeing the alien ships fighting the U.S. Air Force and Flores’ character yells back: “It’s June, Gabriel!” 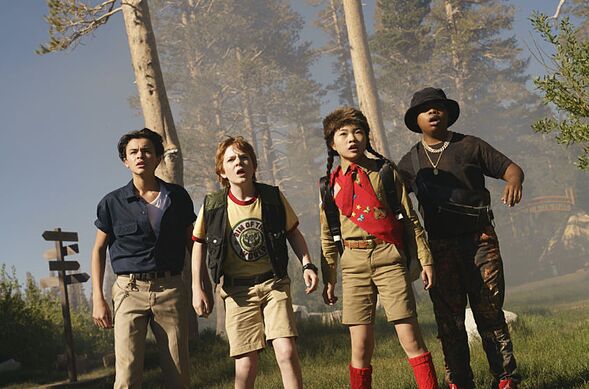 As for the kids in Rim of the World, we have an interesting grouping. Jack Gore (The Kids are Alright) plays Alex. He’s a mega introvert and a nerd whose mom is bringing him to the camp to get him outside. They let you know early on that he lost his father and the way he lost him has a huge impact on him throughout the movie. He reminds me of the kid from Problem Child and that definitely factored into the 90’s vibe given off. His space and nerd culture knowledge is how he helps the group. From there we move to Flores’ character mentioned above. Dariush is a rich kid whose father owns a luxury car dealership. When he’s introduced he has his own driver and designer outfits. He’s mostly comic relief but does have some heroic moments as well as the film goes along.

Our last two members both start out mysterious before letting us know who they are later in the film. The first one is ZhenZhen who is played by Miya Cech (The Darkest Minds). We meet her when she arrives in America (she apparently paid a guy to pretend to be her uncle) and she doesn’t say a word for the first 20-30 minutes of the movie. Besides that, we know nothing about her until later in the film.

Finally, there’s Gabriel. Played by Alessio Scalzotto in just his second role (he played a young Picasso in the Nat Geo series Genius), Gabriel is introduced just before the invasion. He steps in to save Alex from being “helped” by Dariush to get over his fear of heights by being dragged to a cliff. We don’t know where he came from, just that he wasn’t from the camp. He seems slightly older than the other three but when things start happening it becomes clear that they need him. ZhenZhen and Gabriel are both survivors and this also was key for the group.

Rocky at times, watching the kids’ relationships develop over the course of the film was truly a joy. The mysterious kids open up, the scared become brave, and through it all, they get things done by working together.

Rim of the World is simply a fun movie. I’m not a stickler for graphics quality and I think the CGI aliens were fine, as were the effects used for the Air Force vs. Alien air battles and the scenes on the ground of the kids dodging explosions. The humor is the first selling point for me but the interactions between the kids are what made this movie a real pleasure to watch. It honestly made me feel like a kid again. I miss movies like this one and judging by writer Zack Stentz’s twitter feed, I’m not the only one.

Rim of the World is currently streaming on Netflix and is perfect for your Memorial Day weekend movie.