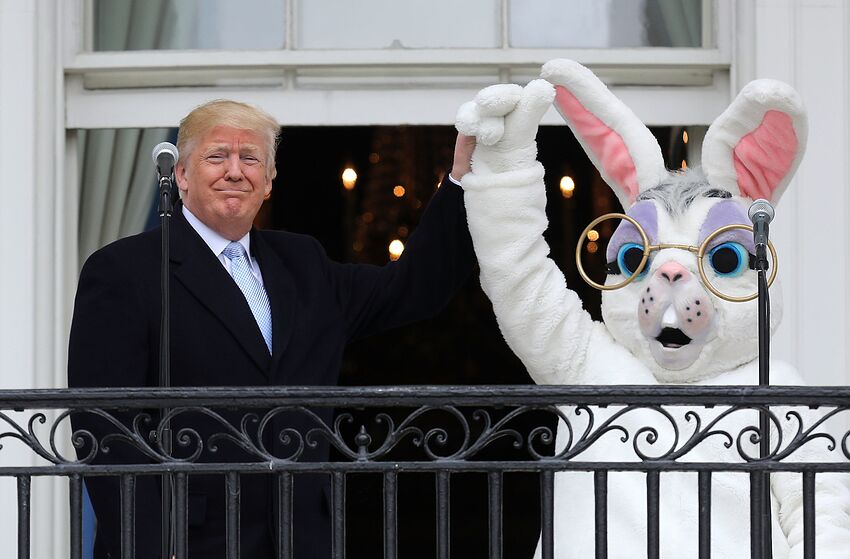 WASHINGTON, DC - APRIL 02: AFP OUT U.S. President Donald Trump (L) lifts the hand of a person in an Easter Bunny costume on the Truman Balcony during the 140th annual Easter Egg Roll on the South Lawn of the White House April 2, 2018 in Washington, DC. The White House said they are expecting 30,000 children and adults to participate in the annual tradition of rolling colored eggs down the White House lawn that was started by President Rutherford B. Hayes in 1878. (Photo by Chip Somodevilla/Getty Images)

Brooklyn Nine-Nine NBC premiere date revealed, what’s in store for season 6? by Paul Zuniga
When will Greenleaf season 3 be on Netflix? by Taylor Sturm

The third installment of Hulu’s Into The Dark series is still a few weeks away but a promo was recently glimpsed during one of the streamer’s commercial breaks.

At the moment, an actual teaser trailer/promo for Into The Dark: Pooka isn’t available. Hulu hasn’t uploaded an official teaser to their main YouTube page or any of the streamer’s social media platforms. Though, we should expect one quite soon — promos are appearing in between ad breaks after all.

As for the feature itself, not much is known about Into The Dark: Pooka. The quick glimpse spotted was so brief that it only allowed us to determine a few things.

For one, Pooka is centered around a young man (Nyasha Hatendi) who winds up working in a costume that isn’t just a piece of apparel. Secondly, his reluctance to suit up in the Pooka costume is well founded. A montage of shots depicts a menacing presence assuming control of Hatendi’s character whilst wearing the costume. And lastly, he’s wearing the costume to promote a children’s cartoon character. The connection between this animal figure and Christmas is lost on us but it should be explained in due time.

While the context of that brief glimpse could vary, the costume likely possesses a connection to a supernatural entity — possibly the Pooka. The lore around the creature says the Pooka can shapeshift between animal and man, so perhaps this costume transforms the wearer into a hybrid of the two. It’s also in the shape of a bunny which could symbolize the Easter Bunny — another mythological figure that originates from the Pooka.

Assuming there is some shapeshifting aspect to the story, Into The Dark: Pooka could introduce the anthology series’ first plot featuring supernatural elements. The first two installments were grounded in the real world but no one expects every entry in a horror-themed series to remain solely in a fictional realm.

Next: Blumhouse's Into The Dark Anthology Series

It is, however, possible that Into The Dark: Pooka will be another psychological thriller like Flesh And Blood. That installment in the Hulu anthology series included various ploys which toyed with the concept of characters imagining the events around them — events which the audience perceived to be true. The same may be true of Pooka if the main character played by Hatendi finds his mental state has become compromised.

For now, we’ll just have to wait until Hulu officially rolls out a trailer and synopsis to determine exactly what Into The Dark: Pooka is all about. We know a little from the teaser glimpsed but a description and cast list would definitely be more beneficial.

Next: Will there be a sequel to Into The Dark: The Body"